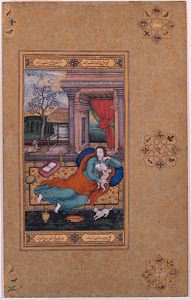 The Virgin and Child

When Jesuit missionaries and other European travellers arrived at Agra with illustrated manuscripts, oil paintings, and engravings, the new art forms fascinated the court and the artists. Figures were taken from the imported works and incorporated into Mughal paintings. Engravings were copied and turned into paintings. Pictures of the quality of this one were mounted in albums alternating with calligraphy, the whole book visually unified by similar borders throughout.
The exquisite colors, volume and finish seen in this painting are those things for which Basawan was famous at the end of the 16th century, and, indeed, for which his work is famous today. An example of his early painting is the Tutinama ilustration of the storm at sea.

The Indian painters incorporated a great deal from the exotic pictures into their own work. European paintings, with their visual tricks for depicting spatial recession, volume, and folds in draperies, intrigued the patrons and artists at the Mughal court but, like many novelties, were not a lasting fad. The tricks of Western art were copied, understood, assimilated, and soon rejected. Perhaps the Westerner is particularly drawn to European themes in Mughal art because they are familiar. Like Hinduism, Indian art absorbs foreign intrusions and returns to tradition, enriched by the adoptions and adaptations but nevertheless essentially Indian.

MANUSCRIPT
This painting was done for Akbar and collected by Jahangir in a famous albumâthe Muraqqa-e-Gulshan (The Gulshan Album), in the Imperial Library, Gulshan Palace, in Teheran, also known as the Jahangir Album. The selection of pictures and surrounding margins, considered to represent some of the finest work of any Mughal atelier, serve as guide to Jahangirâs taste. Leaves for the album were set in margins painted with figural decoration for calligraphy and abstract designs for paintings. Here the patterned embellishment is filled with delicately painted birds and animals, subjects much beloved by Jahangir.

SUBJECT
The Virgin, resting on a gilded carpet, holds the Christ Child to her breast. Behind them, a Mughal-style verandah is screened by doubled curtains of red and green, tied back to reveal a softly described distant landscape. On an outdoor extension of the verandah, a goat rests calmly, recalling perhaps the unicorn iconography associated with the Virgin. Behind the extension are a reservoir or well and a planted garden.

STYLE
European subject matter and technique have been modified to Mughal taste. Voluminous and dramatically shaded robes and curtains as well as receding diagonals in the architecture are taken from European art. The Mughal artist, however, saw no need to compromise the beauty of the flat flower-filled carpet and shows it as though seen from directly above, which gives the Virgin an appearance of floating above it, perhaps something the artist thought suitable to her station. An expression of erotic reverie, neither wholly maternal nor virginal, also plays about her lips and downcast eyes. European iconography calls for exposure of only one breast, not the two shown here. The picture has been attributed to Basawan (See Shipwreck earlier in this exhibition) because of the dramatic handling of the drapery and the mysterious ambiguity of the Virginâs expression. The optical realism produced by European artistic devices suited both Akbarâs and Jahangirâs interest in description.

October 2005
Domains of Wonder
Christian subjects were also a source of fascination for emperor Akbar, and the artists in his atelier rendered them in unusual and visually engaging ways that reveal their peculiar interpretation of Christianity. More a mother goddess than a Madonna, the central figure reclines while nursing the child, accompanied by symbols of fertility, including the goat, melon, water pitcher, and the well. The poem written in Persian in the cartouches seems to extol her as the greater divinity:
A beauteous moon has been born of the sun
And feeds upon the milk of its breast.
A dainty bud floating upon the surface of the spring
Of beauty with which the very face of heaven is washed.

Natif, Mika. Renaissance painting and expressions of male intimacy in a seventeenth-century illustration from Mughal India University of Toronto. Toronto, 2015

Inscription, On front: A beauteous moon has been born of the sun And feeds upon the milk of its breast. A dainty bud floating upon the surface of the spring Of beauty with which the very face of heaven is washed.