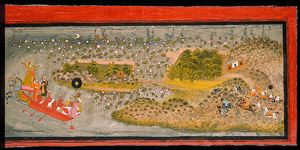 04/14/2017 Diana Chou
Jagat Singh II ruled the state of Mewar in Rajasthan from 1734 until 1752. This painting highlights the Maharanaâs hunting skills, a preferred pastime of the elite ruling class. He is depicted twice, each time painted with a golden halo signifying his divine status. On the right he and his cavalry hunt wild boar, while on the left he stands on a boat with a horse-headed prow filled with attendants and courtiers as falcons hunt ducks. A lush pond of lotus sprays decorates the background.
Last Updated: 9/5/2017

Your current search criteria is: Portfolio is " South and Southeast Asia" and [Object]Century is "18th century" and [Object]Obj. Type is "Watercolor Painting".