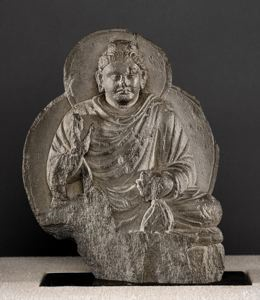 Buddha means âone who is awakened,â and images of the Buddha form the focus for worship among Buddhists. This sculpture would have adorned the exterior of a holy site. His hands are held in the positions typical of this early period: the right hand held up with the palm out reassures his followers to be unafraid, while the left hand grasps his robe.

June 2006
Asian Reinstallation
In its original context, this image of the Buddha, the enlightened being of Buddhism, is likely to have adorned the exterior of a sacred Buddhist monument known as a stupa. The double halo reveals his status as a being worthy of worship. His hands are held in the positions typical for Buddha icons from this early period: the right hand gestures to his followers that they should have no fear, while the left hand grasps his robe.
The softly modeled face and the naturalistic drapery indicate that this sculpture was produced in the region of Gandhara, centered in present-day Pakistan. From the fourth century BCE until the fifth century CE, this region continually came in contact with Greco-Roman cultures of the Mediterranean, and Greco-Roman stylistic elements were selectively incorporated into Gandharan sculpture.
Last Updated: 3/13/2014

Your current search criteria is: Portfolio is " South and Southeast Asia" and [Object]Century is "2nd century".