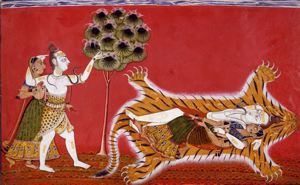 Shiva, Ever Solicitous of His Other Half

This painting is the first from a set of illustrations of the fifteenth-century Sanskrit poem Rasamanjari by Bhanudatta, completed in 1695 in Basohli. The poem describes romantic situations and the types of lovers who would be thus engaged. It was illustrated countless times, often with the Shiva or Krishna and their consorts depicted as the lovers.
Bhanudatta's verse here illustrated:
Out of apprehension for his sweetheart's fatigue, Shiva extends his foot forward on uneven ground, and plucks a flower from a tree with his hand. He further holds Parvati, faint from excessive pleasures of love, to his body, and sleeps to the right on a bed fitted with an antelope skin.
A Braj translation is also on the reverse, in which the antelope skin has been replaced with a lion's. Devidasa has taken the liberty to paint a tiger's skin, with a great effect of energy and fierceness generated by the claws.

Power & Desire, 04/00
The opening leaf of a series on the kinds of lovers, this painting illustrates a loverâs tender concern. As Shiva and Parvati walk through the forest, he is solicitous of her needs. They walk on uneven ground, so he puts his foot
forward to test the earth for stones and thorns. He plucks perfumed flowers for her. Then, holding her near, he lies with her on a bed made of a tigerâs pelt.
The traditional bold colors of the Basholi school are used in a startling, graphic design, that also suggests the union of Shiva and Parvati as one. He walks with the right foot, she with the left. The âup-endedâ tiger skin seems aflame with energy, and on the bed, Parvati wraps her red scarf across her loverâs body.

VISIONS OF THE GREAT GODDESS
September 2004
Languorous as his divine consort is with love, and ever solicitous of her, - the beautifully crafted verse in Sanskrit says - Shiva puts his right foot forward as they walk, for fear of the ground being uneven, extends his right arm to pluck a flower; and when they lie down on their antelope-skin, he places all the weight on the right side, so as not to cause her any discomfort. The Hindi rendering of the verse says much the same thing in its own manner, except that it replaces the 'antelope-skin' of the original with a 'lion-skin'. In his rendering the painter makes a further change: it is a tiger-skin that he brings in to serve as the bed of the divine couple.
Shiva, for all his appearance as a divine yogi - third eye on the forehead, moon-digit in the locks, snake around his neck - wears the gentlest of looks. As an anukula nayaka should.

October 2005
Domains of Wonder
The text on the Rasamanjari opens with an unusual verse dedicated to Shiva, which focuses not on the glory of Shiva as a great god, but on his human aspect as a tender, caring husband. The artist Devidasa recreates such an image of Shiva, who, in the account, extends his right arm to pluck a flower for his beloved wife, Parvati. When they lie down, he is careful to lean to one side, so as not to cause her any discomfort. The bold, rich, red background sets off the delicate workmanship seen in the flowering tree and Parvati's dress and jewelry.
Last Updated: 9/5/2017

Inscription, On reverse: Om. His own foot he places forward first . . .

Inscription, On reverse: Seeing that the ground is uneven, he . . .

Your current search criteria is: Portfolio is " South and Southeast Asia" and [Object]Display Artist is "Devidasa".