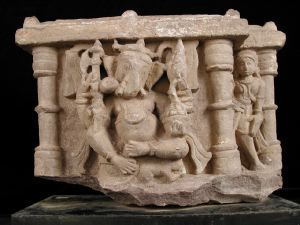 04/14/2017 Diana Chou
Ganesh is considered the Lord of Auspicious Beginnings who is honored at the beginning of any new venture. In this sculpture he sits in the posture of royal ease with his mount, the rat, below him. In his hands he holds a bowl of sweets and an ax.
Ganesh was the child of Parvati, born while Parvatiâs husband Shiva was away. Upon the godâs return home, Ganesh blocked Shivaâs entrance and the furious Shiva cut off the boyâs head. Parvati demanded that Shiva make the boy whole; rushing into the forest, Shiva encountered an elephant whose head he removed and placed on Ganeshâs body.
Last Updated: 3/22/2021

Your current search criteria is: Portfolio is " South and Southeast Asia" and [Object]Obj. Type is "Stone Sculpture".