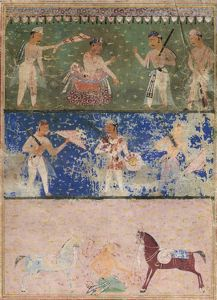 March 2005
Origins of Mughal Painting
Shown here are two pages from a lavishly illustrated romance that tells the adventures of two lovers, Laurak and Chanda. Produced just before the founding of the Mughal atelier, the manuscript is a crowning achievement of the Indo-Persian hybrid style. The story itself was written by an Indian Muslim, in a local Indian dialect of the Ganges River region, but using Persian script. The Indian painter, probably a Hindu, followed Persian conventions of the vertical book format and pastel coloring, while retaining the Indian penchant for compartmentalized spaces, profile view, sharp lines, and alert angular gestures. Though the grassy tufts scattered across the backgrounds are Persianate, the marvelous globular tree is reminiscent of indigenous Indian types as seen in the page with Krishna in Section II (1990:579). The dramatically swirling skies and textile patterns are distinctive to this manuscript and add to the emotion of the scene.
The figures, leafy ground cover, and some of the pink background in one of these two paintings have been overpainted (1990:258). The other page with three registers (1990:257) has not been overpainted at all, and despite its somewhat damaged condition, the sensitivity and delicacy of the painting is clearly visible throughout this work. This manuscript exhibits a complete melding of Indian and Persian traditions into a fresh new harmonious work of art and literature. The painters who formulated and mastered this hybrid style were prominent members of the new Mughal atelier under Akbar.
-------------------------------------------------------------------------------------------------------------

The Chandayan is the earliest work in the genre of âSufi romance,â stories of lovers whose quest for union mirrors the mysticâs search for spiritual truth. The narratives originate from local folk repertoires and were adapted to suit the multiple levels of meaning required by the genre.

Once Laurak, a warrior in Mihrâs army, defeats Rupchand, he meets and falls in love with Chanda. Their affair is discovered, and they must elope. Upon leaving the city, they are intercepted by Chandraâs husband, Bavan, an impotent coward. Bavan attacks Laurak, but, as Chandra anticipates, his arrows fail to reach their mark.
Last Updated: 9/5/2017

Your current search criteria is: Portfolio is " South and Southeast Asia" and [Object]Obj. Type is "Watercolor Painting" and [Object]Century is "16th century" and [Object]Display Artist is ".