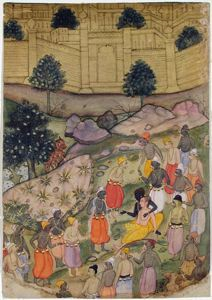 Landing back on the mainland, Hanuman brings the news of Sitaâs whereabouts, the layout of the city, and Sitaâs message to Rama. Here, with Lanka in the background, Hanuman hands Rama Sitaâs jewel. Rama sits with his arm around Lakshmana, and the monkeys chatter excitedly about the prospect of taking the citadel. Ravanaâs spotted demons can be seen spying on the rescuers from behind a rock.

Ravanaâs demons were a motley group, but they were formidable enemies and victors in many battles. Ravana himself had been brought to his evil ways by a path that was not without honor. He had crossed the line that made him vulnerable to death, however, by indulging his lust for Sita, taking her from her husband, and driving himself to unreason in his desire.
------------------------------------------------------------------------
During the battle, Rama and Lakshmana both fall victim to an attack by Ravanaâs son Indrajit. Rama regains consciousness, but Lakshmana appears to be mortally wounded. Hanuman is quickly dispatched to bring back the only known remedy, healing herbs that grow on the peaks of the Himalayan mountains. He returns with a chunk of the mountain on which the herbs are growing. In the painting, Rama and Lakshmana lie in front of Ravanaâs golden castle, surrounded by anxious bears and monkeys. Three demons watch the miraculous recovery from behind the transplanted mountain sprouting golden plants. This painting comes from a well-known manuscript thought to have been made in Bundelkhand for Bir Singh Deo, a northern Indian raja and close ally of the Mughal emperor Akbar. The manuscript was apparently burned or otherwise damaged, and each of the pages shows evidence of this history.

Inscription, : This is a YuddhakÄá¹á¸a selection from a version of VÄlmÄ«ki's RÄmÄyaá¹a, and I have found the text in a publication (in Sanskrit). It was extremely difficult to find this text (I spent many many hours in the library trying to find it!), but just a few days ago I was able to find the text! In the manuscript, so much of the text was missing from the fringes, that it was nearly impossible to translate (a little dot above a syllable in Sanskrit can mean a world of difference in translation). This text, although part of the YuddhakÄá¹á¸a, is from the appendix to the critical edition, meaning that the text is not found in the southern recension of the text, and is likely only in some northern families of RÄmÄyaá¹a texts. I haven't found any translations for the appendices, but I have emailed some RÄmÄyaá¹a specialists to see if they are familiar with any publications that have translated the appendices. The good news is that I am able to hypothesize what the missing text is for this manuscript, since much of the remaining text matches the Sanskrit publication quite well. If there is an English publication out there, I will provide a translation from it, otherwise translating this will be much more reasonable now that I have a good guess as to the missing letters from each line. Although this is still pending, I'm so glad that all of my work on the manuscript didn't lead us to a dead end! [MS: Never heard back from JB-H to complete this translation]

Your current search criteria is: Portfolio is " South and Southeast Asia" and [Object]Obj. Type is "Watercolor Painting" and [Object]Century is "16th century".