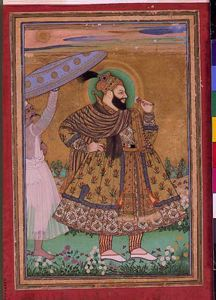 The radiant Abul Hasan Qutb Shah (r. 1672- 1687), nicknamed Tana Shah the King of Taste, swaggers in his garden sniffing a flower, a shield hoisted aloft to protect him from the sun and magnify his importance. He seems to be an amiable, happy soul, fond of sweet flowers, luscious golden textiles of many types, jewels, and very good food. Tana Shah was a famous poet in Deccani Urdu, the language of the Deccan. He is accused by contemporary Mughal historians (in his enemy Aurangzeb's camp) of debauchery and religious heresy. The grounds for the religious heresy charge might have stemmed from his wearing gold, which from Aurangzeb's orthodox Islamic point of view would have been forbidden.
Aurangzeb beseiged the fort at Golconda for 7 months in 1687 before it fell and Tana Shah was taken prisoner and confined until he died in 1704. Golconda was reduced to a province of the Mughal empire.

Power & Desire, 04/00
Sultan Abul Hasan is seen here, on a mid-morning walk stopping for a moment to take in the fragrance of a flower.
The image conveys several attributes of kingship. Abul Hasanâs divine status is suggested by a glowing halo. Brighter than the sun from which he is being shielded, the Sultan eclipses all, including the barefoot attendant, dressed in muslin and holding a parasol, who is all but crowded out of the picture. The Sultanâs presence is enlarged by layer upon layer of golden robes, jewels, and furs. As son-in-law of the reigning Sultan, he had retired from the world to follow the path of Islamic mysticism known as Sufism, when a palace coup propelled him to the throne.

October 2005
Domains of Wonder
Abu'l Hasan was known to be a man of good taste and a student of a renowned Sufi saint. Instead of the fly-whisk or parasol placed over the head-traditional signifiers of sovereignty or divinity-a decorative shield is held above the sultan. Perhaps this was the sultan's subtle attempt to confer status upon himself without offending his Mughal overlords.
In the genre of portraiture, Mughal and Deccani patrons shared an interest in naturalism. The relaxed atmosphere, gold sky, and stronger suggestion of movement, however, distinguish this portrait from its typical Mughal counterparts.
Last Updated: 9/5/2017