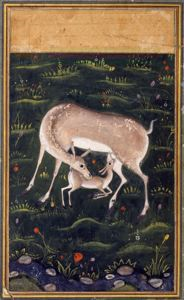 A doe nursing her fawn

This painting is from a now-dispersed album which contained another early Mughal natural history study, that of a cow and her calf. Akbar's grandson Jahangir is usually considered to be the great Mughal patron of painting of the natural world, but the doe and the calf are evidence that such studies were produced in the imperial atelier from the beginning of the reign of Akbar.
Last Updated: 9/5/2017