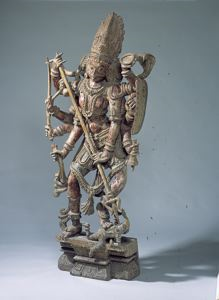 Asia Crossroads installation
October 2003
This eight-armed Hindu god is a manifestation of Shiva whose specific identity remains uncertain. Shiva, Lord of Destruction, stands alongside Brahma, Lord of Creation, and Vishnu, Lord of Sustaining Existence, in the triad of supreme Hindu deities, Shivaâs many forms can sometimes be identified by attributes, actions, and other signs, although iconographies vary regionally. Three horizontal lines (tikalas) on his forehead assure the Shaivite identity of this figure. (Vishnu devotees wear vertical tikalas.) These marks flank a vertical third eye, the sign of Shivaâs wisdom and fiery energy. The graceful dancing posture of the body is also characteristic of Shiva. The god has a skull in his crown, which identifies him as a demonic form. In his eight arms (counterclockwise from the upper left) he holds: a trident, a drum, a sword, a noose, a bell, a shield, and a skullcap begging bowl. With his trident, he pierces between the eyes a demon held under his gracefully poised foot. His body is red in color; the body of the demon underfoot, blue.

This iconography suggests possibly Shiva as the slayer of Andhaka. Born of Shivaâs anger when his wife Parvati playfully put her hands over his eyes during love-making, Andhaka (whose name means âblindâ) was the ill-begotten child of the moisture of Parvatiâs hand and Shivaâs roused heat. Shiva bestowed the child on the King of the Demons for upbringing. Andhaka grew to become proud and lustful, desiring even Shivaâs wife Parvati, whom he did not know was his mother. He challenged Shiva to a battle. (The Oedipal parallels are marked.) Shiva destroyed Andhaka, impaling him upon his trident, and held him aloft until the demon dried and wizened to a skeletal appearance. This death was Shivaâs boon to Andhaka, for it released him from his demon nature. Shiva then opened Andhakaâs third eye and presented him to Parvati as her son. More commonly, the iconography of Shiva as the slayer of Andhaka shows him holding the demon, pierced through the heart, aloft on his trident, not pierced through the eyes and underfoot.
Last Updated: 5/17/2016

Your current search criteria is: Portfolio is " South and Southeast Asia" and [Object]Obj. Type is "Wood Sculpture".