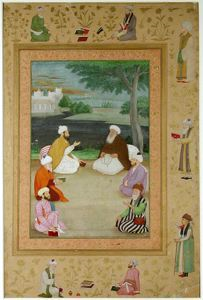 Speaking from the Heart: An Assembly of Poets and Sufis

The Late Shah Jahan Album, now dispersed, was a compilation of calligraphies and portraits mounted so that facing pages were either texts or paintings. The calligraphies had borders of decorated arabesques. The portraits were bordered by people who were subservient to the sitter, engaged in their various occupation. The inscription identifying Daulat as the painter of the border is on the book held by the figure at the lower right.
The men in the main picture are Muslim scholars, all involved with the written word. They are shown in discussion, books kept close by for quick reference. The man at the upper left, hand extended, is Qutb al Din Bakhtiyar Kaki, a celebrated Muslim saint of Delhi who died in 1235. The older man across from him is Shaikh Husain. Both have been identified from inscribed paintings, but the rest have so far not been identified. Unlike the other four, the men at the lower corners wear garments such as those worn when the painting was made. This, then, is an anachronistic gathering of philosophers who never met, but who shared similar beliefs. The painting was probably made for a member of the royal family who followed their teachings.

October 2005
Domains of Wonder
Three Sufi holy men (dervishes) on the right sit across from three literary men outside the bounds of a city and engage one another in learned discourse. The carefully rendered borders of this album page are illuminated with paintings of poets, writers, and holy men with leather-bound books, much like the type of book in which paintings such as this would have once been bound.
Last Updated: 9/5/2017

Your current search criteria is: Portfolio is " South and Southeast Asia" and [Object]Period/Reign is "Mughal/Shah Jahan (1628-1658)".