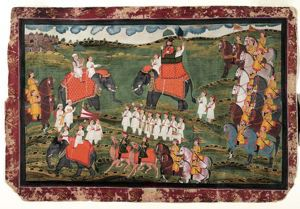 SASAPA December 2014
Colonel James Tod and Guru Gyanchandra riding elephants near Udaipur
Northern India, Udaipur; October 1822 Opaque watercolor on paper
In 1818, James Tod was appointed Resident, or political advisor, to the court of Udaipur. His job was to represent the British East India Company and ensure that the Udaipur ruler acted according to the Companyâs wishes. Tod also had wide-ranging interests, and he traveled extensively through the region, eventually publishing
a major two-volume book on Rajasthanâs history and antiquities. His primary source of information was a man named Gyanchandra, the man Tod called his guru (preceptor) and to whom he credited his greatest discoveries. Both men are represented in this painting. Tod is recognizable in black top hat and long red coat, the same way he is shown in other portraits. Opposite, on a smaller elephant, is the humble Gyanchandra.
Edwin Binney 3rd Collection, 1990.663
Last Updated: 9/5/2017

Your current search criteria is: Portfolio is " South and Southeast Asia" and [Object]Period/Reign is "Sisodia Dynasty/Maharana Bhim Singh (1778-1828)".