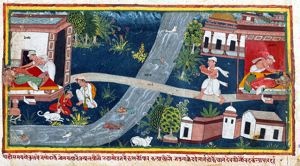 Exchange of the babies

Vasudeva loses no time in spiriting the child away from the prison. The guards are put to sleep by Vishnuâs powers, and, bearing the child aloft, Vasudeva heads towards the River Jumna. Devaki watches with apprehension; her gaze and upright posture portray emotions of awe, loss, and hope for the safety of the child. Vishnuâs serpent provides an umbrella. When Vasudeva reaches Gokula, he finds the citizens asleep under Vishnuâs power and enters the house of Nanda and Yashoda.

Without disturbing Yashoda, who remained fast asleep, Vasudeva placed the male child on her bed, and took away her daughter. He then returned to Mathura and placed Yashoda's daughter on Devaki's bed.

On a dark and stormy night, Vasudeva slips out from the prison where he and his wife Devaki have been locked for months (shown as a red room with a green door in the middle of the painting). As seen on the right, Vasudeva is taking his newborn child Krishna, the blue-skinned baby in the basket above his head, to a woman named Yashoda, exchanging his son for her infant daughter. The elaborate plan to switch the babies had been hatched in order to save Krishna from the evil king Kamsa, who for fear of the prophecy that Vasudeva and Devakiâs son would kill him, had already put to death several of their children. The artist has filled the rest of the page with scenes of the small village where the prison is located, as well as images of the two guards who have fallen asleep and allowed Vasudeva to escape.
The story comes from the foundational Hindu text, the Bhagavata Purana (âThe Ancient Stories of the Lordâ). Written in Sanskrit, it focuses on the Hindu god Vishnu and his different incarnations.
Edwin Binney 3rd Collection 1990.591
------------------------------------------------------------------------------------------------------------
This illustration presents the exchange of babies orchestrated by Vasudeva in order to prevent Krishnaâs death at the hand of Kamsa. Vasudeva is shown three times over the course of the action: on the right side of the painting, he deposits the blue-skinned infant Krishna at Yashodaâs side while she sleeps in her chamber. Having retrieved the girl born to Yashoda, Vasudeva is portrayed on the road, carrying the infant. On the left, Vasudeva appears for the third time, placing the baby beside his wife, Devaki, who is asleep in the prison. Four small labels identify Devaki, Yashoda, the Yamuna River, and the road.
This folio comes from a manuscript in which multiple inscriptions appear on each page: in addition to the labels, there are Sanskrit verses of the Bhagavata, with commentary in Sanskrit as well as vernacular inscriptions. This is one of the few pages without Sanskrit texts. At the bottom of the page, a vernacular inscription written in red ink describes Vasudevaâs daring exchange.
Last Updated: 6/8/2018