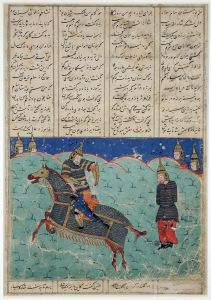 Asian Court Rotation
June 2007
This page is from a secondary epic that relates further exploits of the heroes who appear in Firdowsi's Shahnameh or Book of Kings. It deals with the tragic entanglements of mistaken identity among family members on the battlefield. Faramarz masquerading as his father, the great hero Rostam, has captured his young nephew Borzu, whom he leads by a rope behind the horse. Borzu had come to avenge his father Sohrab's accidental death at the hands of his grandfather, Rostam. Here, Borzu feels that he has failed bitterly in his quest, for he thinks Rostam himself is his captor. The ultramarine blue sky, high horizon line, and pale blue ground with repeated grassy tufts are characteristic of late 15thâcentury Persian painting from Shiraz. Note the earlier form of Faramarz's vambrance, or forearm protector, in comparison to the 19thâcentury type to the right.
Last Updated: 9/5/2017

Your current search criteria is: Portfolio is " Middle East" and [Object]Century is "15th century".