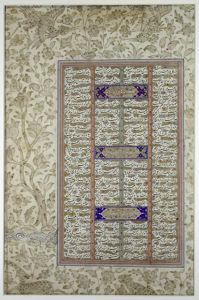 June 2006
Asian Reinstallation
This page from near the beginning of a manuscript of the Persian national epic, the Shahnama, describes in detail the combats between Persian warriors and their Turkic Turanian opponents on the battlefield. The opening passage reads:
Then Furuhil leaped down, beheaded him [Zangula],
Stripped off the Ruman armor that he wore,
And fastened his head to his saddle-straps,
Then he took with him Zangula's steed
And scaled the hill as if he were a leopard,
With breast and hand and sword all drenched with gore.
He raised the glorious flag, glad-hearted
At having reached his goal in triumph.
In the borders, flowering trees and plants grow on the banks of a river, invoking Koranic descriptions of paradise, and two simurghs, mythic birds of thirty colors, fly above. The leopard's pursuit of the deer below mimics each warrior's pursuit of his foe in the battle described in the text.
Last Updated: 1/10/2018