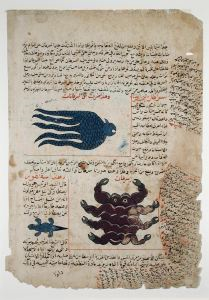 August 2008
Asian Court Rotaation
The work here is written in Arabic, and the Persian name of each creature given as well, which reveals the close intermingling of Arab and Persian cultures during the medieval period. The text discusses the physical characteristics and medicinal benefits of the crab, lobster and skink. The crab is described as having no head but eyes on the shoulders and its mouth on its chest. The lobster is said to have five âsnakesâ as tentacles with one head, and its bile is to be helpful in the treatment of cataracts. The skink is a kind of lizard found in the Nile, and the text states that its flesh is a potent aphrodisiac, and if sexual excitement becomes excessively intense upon consumption, then it can be mitigated by drinking lentil broth.

The text is here written in Arabic, but the Persian names of each creature are given as well, which reveals the close intermingling of Arab and Persian cultures during the 17th century. This page discusses the physical characteristics and medicinal benefits of the three types od sea creatures
At the top is pictured an electric ray (ra'ad), which is described as being so cold by nature that one shivers upon contact, but the meat is a powerful aphrodisiac for both men and women. The second fish is called zamur, and it was returned to the sea if inadvertently caught, for it was thought to save people's lives by attacking dangerous large fish into whose ear the zamur would enter and nibble at its brain. The large fish would then retreat to the bottom of the sea and hit its head against the sea floor until it died, at which point the zamur exits the ear and swims away. The third fish, sabqiyas, pictured on the bottom of the page, has skin that is useful in the treatment of eye ailments in cattle and livestock.
Last Updated: 8/5/2013