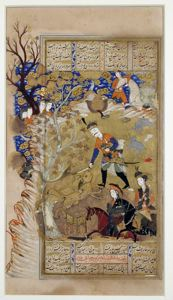 Bahram Gur seizes the crown of kingship from between two lions

Asian Court Rotation
June 2007
This scene depicts the feat of Bahram Gur that led to his securing legitimacy to the throne as king of Persia. Here he is shown slaying the lions as he grasps the crown in his left hand. In the words of the lyric poet Nezami: In the morning when the gold-crowned dawn set up a chair of gold, an ivory throne, The officers and the authoritiesâthose strong of arm and strong of judgment tooâ Persian and also Arab took to horse, and towards the lions of the conflict rodeâ¦ The two vindictive lions lashed their tails upon the ground like dragons twain (in wrath); To say, Who'll seize from us this golden crown? Who'll dare a lion or a dragon rob? They knew not of that man of iron heart, who captured lions and hunted dragons too. It was settled that Bahram of lion heart should take the field and meet the lions first. The crown, if from them taken, should be his; the gold cup and the ivory throne would be his.
Last Updated: 9/12/2018