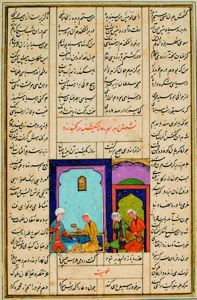 Bahram Gur and the Greek princess in the yellow pavilion

June 2007
Lyric Visions
Bahram Gur, king of Persia, sits at the left with one of his seven brides, the daughter of the Byzantine emperor, who offers him food and wine on a Sunday. In this setting the princess will tell Bahram Gur the story of Solomon and Sheba, which is concerned with honesty and the avoidance of guile in amorous or marital relationships.
Last Updated: 11/30/2011

Your current search criteria is: Portfolio is " Middle East" and [Object]Display Artist is ".