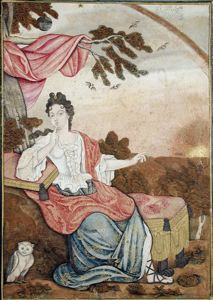 A European woman seated under a branch, with an owl

Dressed in the fashions current during the time of Queen Anne of England (reigned 1702â14), this seated figure with her elbow resting on a massive book, holds her finger to her chin in a gesture of surprise as she points to the setting sun. A white owl sits below, and bats circle in the sky above.

The artist Muhammad Sadiq signed his name in the gold inscription in the upper right corner of this painting. He was probably the follower of an artist of the Safavid court in Isfahan, Iran who specialized in paintings of European subjects. In his own inscriptions on paintings he called himself a foreigner, and he probably was brought into service of the Shah of Iran as an artist to create this genre of paintings.

The penchant for commissioning paintings of European subjects in the Persian court was emulated, like so many aspects of Persian court culture, in the Mughal and Deccani courts of India. The tradition, begun in the sixteenth century in earnest, continued throughout the eighteenth century.
Last Updated: 9/5/2017

Your current search criteria is: Portfolio is " Middle East" and [Object]Display Artist is "Muhammad Sadiq" and [Object]Obj. Type is "Manuscript Painting".