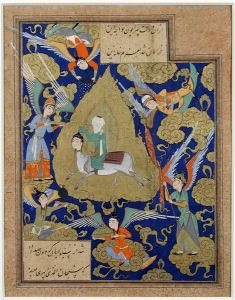 The Miraj (the Prophet ascends to heaven)

June 2005
Tastes in Asian Art Installation
On the night of the mythical journey of the prophet Muhammad, he mounted a female-headed steed, named Burak, and visited heaven and hell in one night. This journey began and ended at what is now the Dome of the Rock in Jerusalem. Here, in his ascent to heaven, the sky is filled with angels on curling gold clouds, who honor him with offerings.
After the middle of the sixteenth century, the face of the Prophet is typically shown veiled, the effulgence of his face being thought too strong for the ordinary viewer.
Last Updated: 9/5/2017

Your current search criteria is: Portfolio is " Middle East" and [Object]Period/Reign is "Shah Tahmasp Safavi".