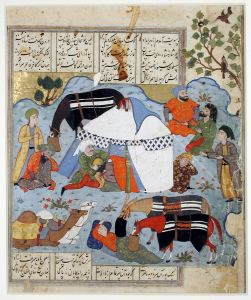 A sleeping man is decapitated in his tent

This painting appears to come from a popular religious narrative about the early days of Islam and the time of the Prophet Muhammad, and it relates the death of a figure named Sufiyan, a foe of Islam. The surrounding text describes how Sufiyan and his troops were making life difficult for the Prophet until one of the Prophetâs supporters decided to get rid of him. This man went to Sufiyanâs quarters, and when questioned, pretended to be a sworn enemy of the Prophet. Sufiyan was jubilant at this piece of news and went back into his tent, whereupon the Muslim disciple of Muhammad sneaked into his tent after dark and managed to cut off Sufiyanâs head.
Last Updated: 9/5/2017

Your current search criteria is: Portfolio is " Middle East".