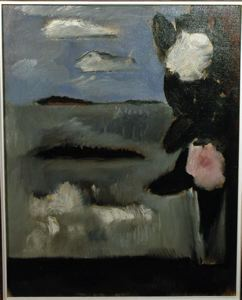 Maine figured prominently in Marsden Hartleyâs life. He was born in the town of Lewiston, spent summers and autumns in the final years of his life in the fishing village of Corea, and died in Ellsworth. Hartley was inspired by different aspects of Maine, and beach scenes, lobsters, churches, and lighthouses appear in his later work. Most conspicuously, the seascapes of Maine inspired many compositions, including Winter WindâMaine Coast. During his last years, Hartley could rarely afford canvas, so he more often painted on Masonite or composition board, making this one of his few works on canvas from this time. The loose brushstrokes are typical of his work from this period but the pop of pink color adds something unexpected to the composition. Hartleyâs vision of the Maine coast makes for an interesting comparison with an earlier painting by George Bellows (1882â1925), Lobster Cove, Monhegan, Maine (1913), also included in this exhibition.
?
October 18, 2014
Anita Feldman, Deputy Director Collections & Exhibitions
Marsden Hartley
American â¢ 1877â1943
Winter WindâMaine Coast
Oil on canvas â¢ 1941
Although born in Maine, Hartley spent his youth in Ohio where he first studied art. Moving to New York to study at the Chase School and the National Academy of Design, he met Alfred Stieglitz and Albert Pinkham Ryder, both of whom influenced his artistic development. Throughout his career, he travelled extensively, spending more than a decade in Europe where he worked through a wide range of modernist styles from Post- Impressionism to Cubism, Expressionism and Symbolism. Settling permanently in Maine in 1937, where he had often summered since 1900, Hartley created a rich series of land and seascapes with strong, simplified forms that emphasize the power of nature.
Museum purchase with funds provided by the Gerald and Inez Grant Parker Foundation
1973.134
Last Updated: 10/20/2014

Your current search criteria is: Portfolio is " American Art" and [Object]Display Artist is "Marsden Hartley".