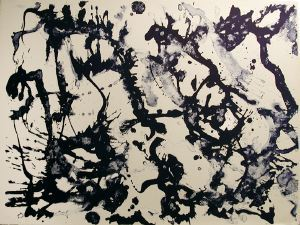 October 18, 2914
Anita Feldman, Deputy Director of Collections and Exhibitons
Lee Krasner
American â¢ 1908â1984
Blue Stone Gold Stone Pink Stone
Lithographs â¢ 1969
Educated at the Cooper Union, the National Academy of Design, and Hans Hofmannâs School of Fine Arts, Krasner embraced abstract art and exhibited with the group American Abstract Artists which included Josef Albers, Willem de Kooning, David Smith, and Jackson Pollock, whom she later married. Her association with Pollock stifled her own artistic expression for a time, but soon she developed her own mature style as an Abstract Expressionist of great power and range. Blue Stone, Gold Stone and Pink Stone are three works in Krasnerâs Primary Series printed in an edition of 100. Its dynamic composition reflects the gestures of the artist as she spattered and dripped tusche (greasy liquid) on the lithographic stone, leading the viewerâs eye to every corner of the sheet.
Gift of Mr. Sanford Robertson
1979.34.1â3
Last Updated: 10/20/2014

1979.34.3
Portfolio List Click a portfolio name to view all the objects in that portfolio
This object is a member of the following portfolios: