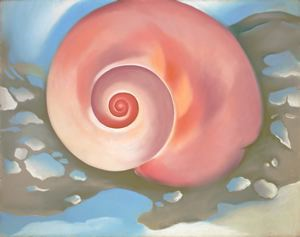 October 18, 2014
Anita Feldman, Deputy Director Collections & Exhibitions
Georgia OâKeeffe
American â¢ 1918â2006
Pink Shell with Seaweed
Pastel on board â¢ ca. 1938
Around 1926 OâKeeffe revisited the concepts of abstrac- tion she had explored earlier in her career but with different purpose and results. In her new work, she abstracted simpli- fied forms from real objects like shells and flowers, reducing them to their essential shapes and patterns. Over the years since 1920 she had enjoyed relaxing at York Beach, Maine where she walked along the beach collecting sea shells, later travelling to the Bahamas and to Hawaii the same year as this work. She kept her collection of shells throughout her life, enabling their use as subjects in her art. For OâKeeffe, the shells were not just sources for abstraction, but artifacts of nature. She later said, âEach shell was a beautiful world in itself... and even now, living in the desert, the sea comes back to me when I hold one to my ear.â
Gift of Mr. and Mrs. Norton S. Walbridge
1978.88
Last Updated: 11/26/2019

Signature, On verso on stretcher bar in pencil at R:

Your current search criteria is: Portfolio is " American Art" and [Object]Obj. Type is "Pastel Drawing".