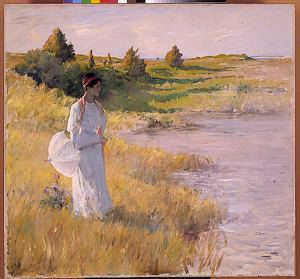 The figure in William Merritt Chaseâs An Afternoon Stroll, garbed in a white dress with coral accents, complements rather than competes with her natural surroundings. The soft yellows and greens that dominate the picture are typical of the artistâs choices in his many renderings of Shinnecock, Long Island, and demonstrate his ability to convey the delicate interplay between light and shadow. In this painting, the late afternoon sun strikes the figure and the cedar trees in the background from behind, casting their shadows forward onto the grassy ground. The paintings Chase completed near the ocean contrast starkly with the darker, more decoratively dense paintings he finished at his Tenth Street studio. While much of his work around this time is focused on the terrain of Shinnecock, such as the areaâs open fields and beaches, he was deeply inspired by his wife, daughters, and other women visitors to his home and studio on Long Island.
Last Updated: 3/27/2013