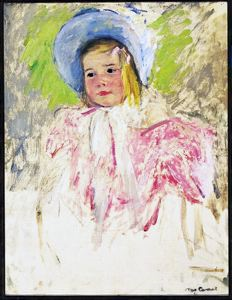 Mary Cassatt once stated, âI am an American, definitely and frankly American.â Despite this bold declaration, Cassattâs artistic transformation took place outside of the United States. Born to a wealthy family in Allegheny City, Pennsylvania, she demonstrated an interest in art from an early age. As a young woman, she studied at the Pennsylvania Academy of the Fine Arts, but she longed to study in Paris. After arriving in France, Cassatt transformed her life. Cassatt was the American Impressionist painter who was most accepted by her European counterparts. Edgar Degas (1834â1917) became a supporter and mentor. Simone appears in approximately twenty works by the artist. The background of the work, with its broad brushstrokes, is more sketchlike than Cassattâs earlier, more well-known works.

October 18, 2914
Anita Feldman, Deputy Director of Collections and Exhibitons
Mary Cassatt
American â¢ 1844â1926
Simone in a Blue Bonnet (No. 1)
Oil on canvas â¢ ca. 1903
Born in Pittsburgh to a wealthy family, Mary Cassatt studied at the Pennsylvania Academy of the Fine Arts in Philadelphia before leaving for France in 1865. As a woman, she was barred from pursuing her education at the Ãcole des Beaux Arts, so she studied individually under several established French painters, among them artist Edgar Degas who became extraordinarily influential in the development of her work. She focused on the intimate spaces of womenâs lives, depicting scenes both of domestic and public life. Children were also a major source of artistic inspiration for Cassatt. This work is one of nearly twenty portraits of Simone, a young girl who lived near her home in the Oise Valley, located fifty miles north of Paris.
Bequest of Mrs. Henry A. Everett
1938.20
Last Updated: 12/22/2015