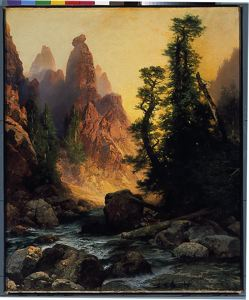 Below the Towers of Tower Falls, Yellowstone Park

Although Thomas Moran was born in England, he is often credited as being one of the first American painters to portray the topography of the American West. His father, an artisan weaver, came to the United States in 1842 and established a place for his family near Philadelphia, and by 1844, the entire family was reunited. In 1871, after reworking sketches of Yellowstone for Scribnerâs Monthly, Moran was so inspired that he obtained funding to join Ferdinand Haydenâs expedition to the Yellowstone region for the U.S. Geological Survey of the Territories. Moranâs paintings and the photographs of William Henry Jackson (1843â1942) encouraged the U.S. Congress to make Yellowstone a national park. The area Moran depicts in Below the Towers of Tower Falls, Yellowstone Park was one of his favorite spots. Moran emphasizes the tall trees and shale warmed by the yellow hues of sunshine.
?
October 18, 2014
Anita Feldman, Deputy Director of Exhibitions Collections and Exhibitions
Thomas Moran
American, born in England â¢ 1837â1926
Below the Towers of Tower Falls, Yellowstone Park
Oil on canvas â¢ 1909
Moran came to the United States from his home in Bolton, England at the age of seven. He first worked as an engraver, eventually becoming chief illustrator for Scribnerâs Monthly magazine. Moran greatly admired the work of the English painter J. M. W. Turner which he saw during several visits to England, and as he developed his career painting landscapes he was deeply influenced by Turnerâs color technique. In 1871 Moran accompanied the Hayden Geological Survey of the Yellowstone Valley, making hundreds of pencil and water- color sketches which later served as the basis for numerous oil paintings. For more than twenty years, Moran made other excursions throughout the American west, depicting the varied landscapes.
Gift of Lydia and Etta Schwieder
1968.48
Last Updated: 10/6/2022