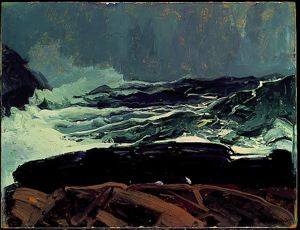 Bellows was born in Columbus, Ohio, and briefly attended the Ohio State University. After saving enough money from playing semiprofessional baseball, he moved to New York City to pursue his art career and study at the New York School of Art. He participated in a number of important exhibitions, including the Armory Show in 1913. Monhegan, the subject of this painting, became popular among artists in the mid-nineteenth century, and in the twentieth century, artists such as Robert Henri (1865â1929) and Rockwell Kent (1882â1971) visited the island. The rich and loose brushstrokes of his Lobster Cove, Monhegan, Maine, particularly in the foreground of the composition, make this work a thoroughly modern picture. The many hues of blue, the foaming water, and the hint of coral paint in the foreground enhance the composition.
?

October 18, 2014
Anita Feldman, Deputy Director of Collections and Exhibitions
George Wesley Bellows
American â¢ 1882â1925
Lobster Cove, Monhegan, Maine
Oil on board â¢ 1913
After early training in Ohio, Bellows studied with Robert Henri at the New York School of Art from 1904â1905 before estab- lishing his own studio in Manhattan. Through Henri, he was associated with the progressive group known as The Eight and the related Ashcan School comprised of artists opposed to the dominance of the Academy and favoring urban realism. In 1911 Bellows summered with Henri on Monhegan Island, Maine where he painted a number of canvases. Returning to Monhegan in 1913 after experiencing the revolutionary European works displayed at the landmark Armory Show, Bellows produced more than forty paintings which displayed a new verve and energy, including Lobster Cove.
Gift of Mrs. Henry A. Everett
1930.52
Last Updated: 7/17/2015

Illustrated Catalogue of the Official Art Exhibition of the San Diego Museum of Art. San Diego, California, 1936
Page Number: 27, no. 276