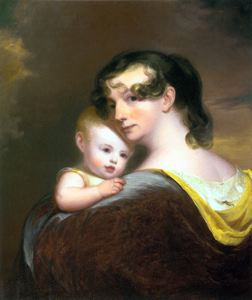 Portrait of Esther Fortune Warren and Her Daughter Hester

Sully arrived in the United States with his family in 1792, when he was just nine years old. In June 1809, he returned to England, where he had the opportunity to meet with the artist Benjamin West (1738â1820) and absorb his techniques. A comparison of Portrait of Esther Fortune Warren and Her Daughter Hester with its companion piece, Portrait of William Warren, reveals how Sullyâs style evolved after he returned to the United States. His rendering of Esther portrays a richer, more decorative dressed figure. The subject wears a velvet robe, and lace on the garment beneath the robe shows across the top of her back. Moreover, the background of the painting is more lush than those in Sullyâs earlier portraits. Esther was William Warrenâs third wife. They had six children together, and Hester was their eldest child. All of the children in the family entered the family business of theater.
Last Updated: 7/24/2017