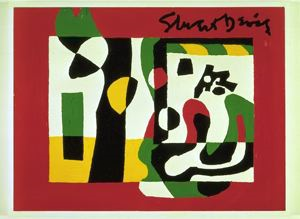 October 18, 2014
Anita Feldman, Deputy Director of Collections & Exhibitions
Stuart Davis
American â¢ 1892â1964
Terrace
Oil on panel â¢ 1962
Stuart Davis was born in Philadelphia but studied art with Robert Henri in New York from 1909-1912, initially working in the style of the Ashcan School. After exhibiting at the Armory Show in 1913, Davis moved away from his early style and experimented with a variety of forms of European Modernism such as Cubism and Post-Impressionism. His work in the 1930s and 1940s bears marked affinities with jazz reflecting his interest in urban culture and his recognition of the parallels between the rhythms of jazz and visual abstraction. Davisâs mature style reveals connections with Abstract Expressionism, featuring abstract still-lifes and landscapes painted in bold, vibrant color. Terrace is part of a series of late pictures whose compositions are divided into two parts in order to subordi- nate the content to the method of making the work.
Gift of Mr. and Mrs. Norton S. Walbridge 1981.69
Last Updated: 10/20/2014