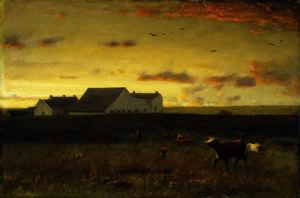 Inness found inspiration in the natural environs of Nantucket, and he increasingly painted the island after 1880. Around the time that he painted Farm Landscape, Cattle in PastureâSunset Nantucket, his letters regularly described the productivity and repeated inspiration he found in Sconset. On August 2, 1883, he wrote, âI saw a very fine sunset last evening from Mr. Burbankâs house which with figures could be made interesting and striking.â Just two days later, he wrote again, âI have just been out to see the setting of the sun, strolling up the road and studying the solemn tones of the passing daylight. There is something peculiarly impressive in the effects of the far-stretching distance, the weather-worn gray of the buildings, and the general sense of solitariness which quite suits my present mood.â Inness separated himself from the Hudson River School by aiming for a more emotional representation of place.

October 18, 2914
Anita Feldman, Deputy Director of Collections and Exhibitons
George Inness
American â¢ 1825â1894
Farm Landscape, Cattle in Pasture (also called Sunset Nantucket)
Oil on panel â¢ ca. 1883
George Inness studied at the National Academy of Design and was influenced by the work of Hudson River landscape painter Asher B. Durand. This particular landscape derived from the summer Inness spent in Sconset on Nantucket Island, Massachusetts in 1883. While artists like Durand aimed for realism in their work, in this painting Inness creates a more atmospheric representation of the landscape. Moreover, Inness was inspired by his interaction with the painters of the Barbizon School in France. As a result, he incorporated a darker palette and looser brushstrokes.
Bequest of Mrs. Henry A. Everett
1938.31
Last Updated: 10/20/2014