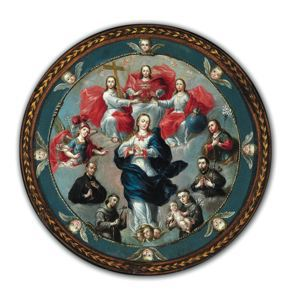 Nunâs badges (
escudos in Spanish) such as this one were made to be worn on the chest as part of daily dress and devotion. This example for a Conceptionist nun features the Virgin Mary crowned by the trinity, surrounded by saints, including Michael, Ignatius, and Francis. Usually painted on copper, such escudos had their origins in medieval chivalric insignia but first became popular among wealthy nuns in New Spain (Mexico). -- MAB 2015

Your current search criteria is: Portfolio is " Latin American".