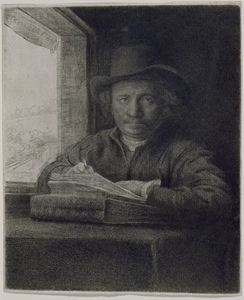 Rembrandt was a famously relentless self-portraitist, but this print marked the return to his etched self-portraits after a nine year interval. It is nonetheless often considered the greatest, most searching, of all his self-portrait etchings. The artificial poses, elaborate costumes, and dramatic expressions of his earlier examples are gone. Instead, we see him drawing, etching, or perhaps just writing. Typical of Rembrandt's-and also Bol's-etchings of around 1650, the print is fairly dense, with rich cross-hatching in the shadows and finely detailed clothing.

There are five states of this self-portrait, although the last is generally thought to be a reworking by a later artist in order to restore a worn out plate. This fourth state represents Rembrandt's final version and includes a landsape view outside the window.
Last Updated: 2/5/2020

Your current search criteria is: Object is "Self-portrait, Etching at a Window".