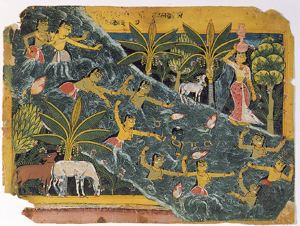 The Bhagavata Purana is the story of the life and adventures of the cowherd (gopa) Krishna, the audacious boy who grew into an audacious man and lover and finally a wise king. As a small boy he teased and played jokes on his mother; as a young man he teased and played jokes on his consort Radha and on his multitude of girl friends, the gopis. Here we see him splashing about with the gopis in the Jamna River, cooling off after spending the night dancing the Raslila, a cosmic dance of passion. This particular Isarda page is unrivalled for the brilliant depiction of the movement of water in the Jamna River.

Power & Desire, 04/00
This painting is from a manuscript of the Bhagavata Purana which describes the incarnations of Vishnu. Its Krishna section dwells lovingly on his childhood pranks. Here Krishna revels with the cowherdesses. We see him splashing in the river Jumna with a bevy of girls, who pelt each other with lotuses. In later literature Radha emerges to show Krishna a different kind of love.

October 2005
Domains of Wonder
On a beautiful autumn night, Krishna decided to invite the cowherd girls of his village to play in the river. The maidens, who were all in love with him, immediately left everything they had been doing to go swimming with him amid the lotus buds. This picture was painted after the inception of imperial Mughal painting under Akbar. Workshops in Mewar, however, continued to produce paintings in the traditional, indigenous style. Only in minor ways are Mughal elements revealed, as in the naturalistic swirling eddies of water.
Last Updated: 9/5/2017

Your current search criteria is: Object is "The Sports of Love".