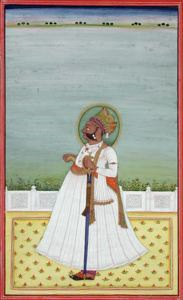 August 2021
Pearls from the Ocean of Contentment
This portrait of Maharaja Gaj Singh of Bikaner (r. 1745â1787), was produced in September 1851 for the ruler Sardar Singh, the great-grandson of Gaj Singh. The artist Ammaddin has depicted the eighteenth-century ruler in the traditional Rajput courtly style for portraiture, adorned with a halo indicating his divine status and portrayed in profile against a background of solid color with two-dimensional patterns.Â

This posthumous portrait depicts Maharaja Gaj Singh of Bikaner (who reigned 1745â87) in courtly finery with a halo encircling his head. The inscription on the reverse states that it was a presentation picture, called najar, made in September of 1851, the year when Sardar Singh became ruler of Bikaner. It is likely that the artist Ammaddin made this painting on the occasion of Sardar Singhâs thirty-third birthday around the time of his accession to the throne, since his birthday was September 14, and his father had just died that August. Sardar Singhâs great-grandfather, Gaj Singh, who is pictured in this painting, fathered sixty-one children, while Sardar Singh had only one.
Last Updated: 2/2/2022

Your current search criteria is: Object is "Raja Gaj Singh of Bikaner".