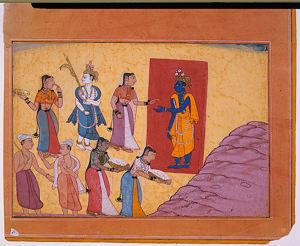 A stamp on the reverse and the salmon-colored border indicate that this painting was kept in the royal library at Bikaner. It belongs to one of the oldest series in the Bikaner collection. The flat rectangle of red behind the blue Krishna is a traditional Indian method of indicating the person who is the object of passionate emotion in the story.
Last Updated: 9/5/2017