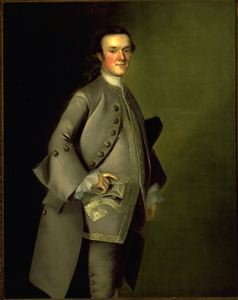 Colonial portrait painters were often commissioned to create a likeness as a way of promoting a subjectâs power and wealth. Joseph Blackburn trained in England before traveling in 1752 to Bermuda, where he painted portraits for two years. By 1755, he had settled in Boston and became a prominent colonial portrait painter. Thomas Wentworth (1740â1768), depicted here by Blackburn in fashionable dress, was a graduate of Harvard College who found work as a merchant in Portsmouth, New Hampshire. He is not portrayed in a luxurious environment or in an overly ornate costume, but his gray suit is stylish and accented with prominent matching buttons and delicate lacework. The representation of his flushed cheeks draw attention to his face, and the position of his right arm on his hip expresses pride and regality. This painting is a poignant testament to Wentworth, who died prematurely at the age of twenty-eight.
?

Your current search criteria is: [Object]CurrentLocation is "@galleries@" and [Object]Century is "18th century" and [Object]Country is "United States".