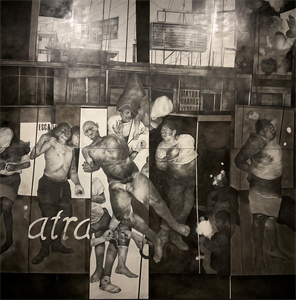 Crosthwaite, who was born in Tijuana, explains his inspiration for this work, âI always thought that being skinned alive was a horrible way to die, and when I started this piece, I wanted to make a very Baroque composition, sort of like Caravaggioâs crucifixion of Peter, a very diagonal composition, and then as I was working through the piece, I was thinking about martyrdom.â Crosthwaiteâs BartolomÃ© uses the predicament of the saint to comment on contemporary society, and specifically to address the abuses at Abu Ghraib, which were made public as he began the work, when photographs taken by American soldiers were released to the media . With the architecture of Tijuana appears in the background, the letters E-S-C-A behind one figure refer to the word escÃ¡ndalo (scandal) and represent another way in which the artist suggests the abuses at Abu Ghraib while simultaneously portraying a contemporary Saint BartolomÃ©.
?
Last Updated: 3/27/2013

Your current search criteria is: [Object]CurrentLocation is "@galleries@" and [Object]Century is "21st century".