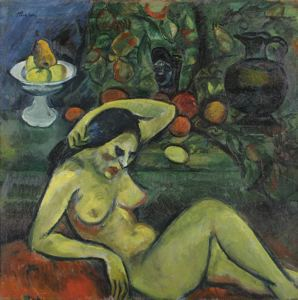 Permanent Collection wall label:
Like his fellow members of the German Expressionist group Die BrÃ¼cke, Max Pechstein was fascinated with the idea of an art that did not rest upon the European academic tradition. Trained as an architect rather than as a painter, Pechstein spent time in the ethnographic museums of Berlin and Dresden, where he studied the arts of Africa and the Pacific islands as a means of developing his own artistic language. He was also greatly influenced by French Post-Impressionism: his fascination with the art of the Pacific was seen through the filter of Paul Gauguinâs art, and this paintingâs exotic elementsâincluding what appears to be a Pacific wood carvingâ make an explicit link to Gauguinâs work. Similarly, the bright colors and flattened forms of this canvas resemble those used by Henri Matisse.


HUMAN BEAST exhibition label:
This canvas shows how greatly Pechstein, like his fellow members of Die BrÃ¼cke, was influenced by Paul Gauguin. Composed in bright colors and flattened forms, the painting includes what appears to be a Pacific wood carving, making explicit the link to Gauguinâs work. In 1914, furthermore, Pechstein would travel to the Pacific island of Palau, again in emulation of Gauguin. Although actually painted in 1911-12, this canvas is so close to Gauguinâs Tahitian-period pictures that it was long thought to have been made after Pechsteinâs return from Palau.
One of many double-sided paintings by Pechstein, the work is exhibited so that both sides can be seen, even though the landscape on the versoâone of Pechsteinâs many scenes of nudes in a landscape âis turned 180 degrees. Examination of the canvas reveals that Pechstein painted the nude later and intended it to be the final, finished aspect of the work.
Last Updated: 10/4/2021

Your current search criteria is: [Object]CurrentLocation is "@galleries@" and [Object]Country is ".