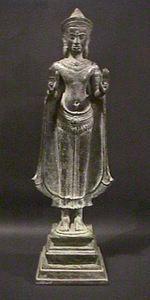 04/14/2017 Diana Chou
The Buddha was initially depicted only as a monk, but during the late ninth and early tenth centuries, the doctrine of the Three Bodies of Buddhahood emerged, stipulating that the Buddha existed in three different planes. These were the historical figure, who continued to be depicted as a monk; a Buddha in the Beatific Body of Bliss, depicted, as in this sculpture, as ornamented and crowned; and the Buddha in the Body of the Law, which is unmanifested.

Your current search criteria is: [Object]CurrentLocation is "@galleries@" and [Object]Country is "Cambodia".