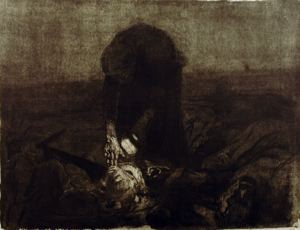 Most of the Expressionist images of war are a reflection of World War I, but this etching predates that conflict and was inspired instead by the German Peasant War of the 16th century. In the aftermath of a battle in which the peasants were slaughtered, a mother searches among the fallen corpses for her son. The scene of loss is nonetheless so familiar that it could describe any battle, and indeed, the print had been designed in 1907 but was reissued in a second edition in 1921. The image is eerily premonitory, for Kollwitzâs own youngest son died on the battlefield in 1914.
Last Updated: 7/26/2012