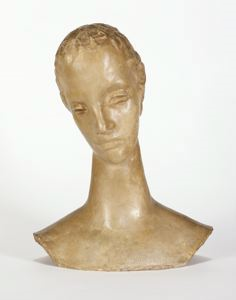 Lehmbruck is known for his sculptures of slender, elongated figures whose solemn, often downcast gestures convey introspection and a hushed, brooding emotion. He studied in DÃ¼sseldorf but moved to Paris in 1910, where he was influenced by Aristide Maillol and Auguste Rodin, although his own work was less voluptuous and more stylized than that of either of those artists. Around 1911, he began a series of sculptures of pensive women, works he continued to produce when he was forced to return to Germany at the outbreak of World War I. Many of his sculptures are, like this example, in cast stone, a cement-like material that could be used to create only slightly differing multiple editions of a piece.
Last Updated: 8/8/2013