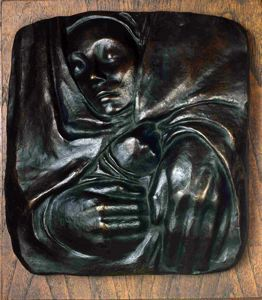 KÃ¤the Kollwitzâs work had long focused on the life of the working class and, as may be seen in her other works in this exhibition, she developed a style in which simplified, monumental bodies make forceful social commentary. She was an outspoken opponent of war, and with the rise of the Nazi party in the 1930 and the prospect of a new war, her art persistently developed the themes of the mother and child, war, misery, and death. These motifs likewise underlie Rest in the Peace of His Hands, where a sleeping childâs face at center is protected by the large hands that surround it. Kollwitz designed the relief for her own family tomb. The title comes from a poem by Goethe that is often cited as a plea for peace: âThe East belongs to God / The West belongs to God / North and Southern lands / Rest in the peace of His hands.â
Last Updated: 3/24/2022