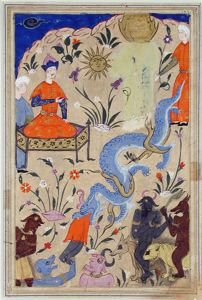 March 2005
Origins of Mughal Painting
This painting is an example of the type of less refined Persian book illustration to which artists in India would have had access as a model when commissioned to produce works for Muslim patrons. It was probably painted by an Iranian artist who was working either in one of the provincial centers of Iran or for a Muslim patron in Sultanate India. The pale ground with scattered plants, willowy figures drawn with loose delineation in three-quarter view, and the form of the demons are all stylistic features of Persian painting. This picture is typical of those created in provincial centers that were removed from the Timurid or Safavid courts of fifteenth and sixteenth century Iran.
This page is from a history of the prophets leading up to Muhammad, and, at some later date, the figure of Moses was painted over by a viewer who felt that the effulgence of the prophet was too great for him to be shown in figural form. Only the gold of his flaming aureole was allowed to remain, and it was expanded to cover his face.
Last Updated: 8/30/2022

Your current search criteria is: [Object]CurrentLocation is "@galleries@" and [Object]Country is "India or Iran".