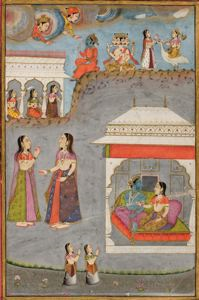 This painting relates to a verse in the Rasikapriya that is part of a series of descriptions of different categories of ideal women. Here, Radha is featured as the ideal example of a mature, satisfied woman who âshines with splendor before Krishna,â and in the painting the lovers gaze into each otherâs eyes while aquatic divinities praise them. Keshavdas states that her form looks as though it were made by Brahma, the four-headed god of creation, who is shown perched on the horizon. Next to Brahma are Kama, the god of erotic love holding a bow and arrow made of flowers, and Sarasvati, the goddess of music and learning, his consort, who rides the swan. The poet and artist imply that Radha rivals them in her beauty, so she is depicted as ranking among them, as she shows honor to the goddess.
Last Updated: 9/5/2017