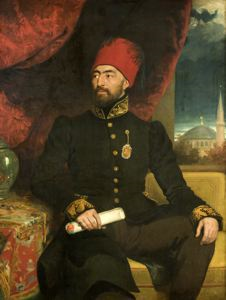 Portrait of a Dignitary

This painting was considered to be the work of Thomas Lawrence (1769â1830) when it was acquired, and the sitter was identified as Sidki Efendi, who was the Turkish ambassador to the British court around the year 1800. Now, however, the portrait is thought to be by a follower of Lawrence, and it has recently been proposed that the artist is the painter George Dawe. Under the patronage of the English Royal Family, Dawe travelled throughout Europe and painted portraits of aristocrats, diplomats, and military leaders. He later spent nine years working in Russia at the invitation of Tsar Alexander I, again concentrating on portraits of military officers and figures at court. The reattribution to the work is supported not only by its stylistic similarity to his works, but also by the paintingâs Russian provenance.
Last Updated: 8/27/2019

Your current search criteria is: [Object]CurrentLocation is "@galleries@" and [Object]Country is "United Kingdom".