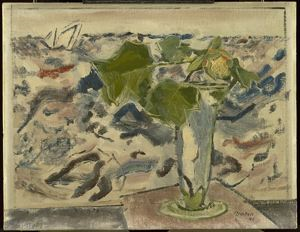 Still-life and the Sea

October 18, 2014
Anita Feldman, Deputy Director of Collections & Exhibitions
John Marin
American â¢ 1870â1953
Still Life and the Sea
Oil on canvas board â¢ 1942
Marin was among the first American painters exposed to the range of modernist styles developing in Paris during the first years of the twentieth century. He received his artistic training at the Pennsylvania Academy of Art under Thomas Anshutz followed by two years at the Art Students League in New York. Five yearsâ travel in Europe introduced him to the avant- garde trends evolving there which he later explored in his own art after settling in New York in 1911. Beginning in 1933, Marin summered at Cape Split, Maine every year until his death, recording scenes of the coast in many works such as Still Life and the Sea. Here, the turbulent sea with its tossing sailboat is rendered in an abstract manner that serves as a dynamic background for the vase of flowers in the foreground.
Museum purchase with funds provided by the Gerald and Inez Grant Parker Foundation
1973.133
Last Updated: 5/7/2021

Your current search criteria is: [Object]CurrentLocation is "@galleries@" and [Object]Display Artist is "John Marin".