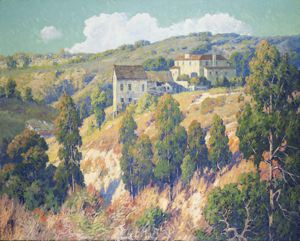 This frame, original to the painting, was designed by Stanford White, but was mass-produced by the Newcomb-Macklin Company. The ornament is based on classical motifs of alternating chevron and twisted rope patterns. The middle pattern is a classical Greek wave design visible on Attic ware vases. The corners and center points have composition cross straps and ribbons. All of these designs were created by machine, not carved by hand, making the frame affordable.

The finish was achieved by brushing a mixture of bronze powder with alcohol, gelatin, and water onto the bole, and polishing it with agate stones to a soft luster, in imitation of old patinated water gilding. This technique, sometimes referred to as âRoman Gildingâ or âEnamel Process,â will not oxidize or darken because the powder is embedded in the glue solution.
Last Updated: 6/5/2017

Your current search criteria is: [Object]CurrentLocation is "@galleries@" and [Object]Display Artist is "Maurice Braun".