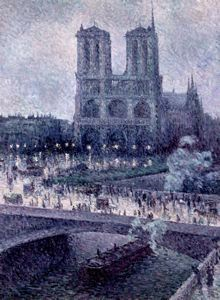 Luceâs career began as an teen-aged apprentice to prominent Parisian journal illustrator EugÃ¨ne Froment. Through Froment, he gained access to many of the famous artists and studios of Paris, and by the mid-1880s, Luce was a full-time painter. He soon thereafter met Georges Seurat and the other Neo-Impressionists and adopted their techniques of divided color and rich textures. By 1900, however, Luce relaxed the rigor with which he followed Neo-Impressionist precepts. In this view of the cathedral of Notre-Dame, for example, Luce has varied his touch, in contrast to his earlier works where the paint was applied in brushstrokes or dabs of a consistent size. In the sky, larger dabs merge, translating the effect of a leaden, stormy sky onto the canvas; these contrast with the clipped points of color with which Luce describes the hustle and bustle of the Parisian streets and quais.

Maximilien Luce
French â¢ 1858â1941
Notre Dame
Oil on canvas â¢ ca. 1900
Trained as a printmaker, Maximilien Luce was first noted as a painter by the critic FÃ©lix FÃ©nÃ©on, who coined the term Neo-Impressionism to describe a new school of landscape painting based on âscientificâ principles of color, in contrast to Impressionismâs largely instinctive attempt to capture the fleeting and spontaneous effects of light. Like his fellow Neo-Impressionists Seurat and Signac, Luce experimented with the separation of colors into individual, contrasting dots on the canvas.
Gift of Ambassador and Mrs. Maxwell Gluck
1985.77
Last Updated: 7/7/2015

Your current search criteria is: [Object]CurrentLocation is "@galleries@" and [Object]Display Artist is "Maximilien Luce".