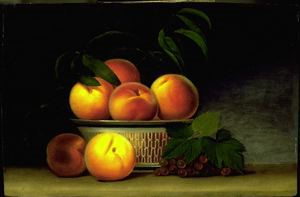 Peale was born in Annapolis, Maryland, but raised in Philadelphia, a center of American art. He preferred still lifes even though he was an able portrait painter and portraits were more lucrative. Around 1812, Peale began to focus on still lifes, as his ill health interfered with his ability to interact with sitters. By the early 1820s, he was devoted to still lifes. In fact, Peale was one of the first American painters to make the still life the focus of his oeuvre. Often, a sense of anatomy in his still lifes augments his compositions. Here, the branches of the peach on the left might reference hungry fingers plucking a fruit from the display. Like this painting, his still lifes tend to emphasize the horizontal plane and exhibit an overall restraint as opposed to the depiction of abundant forms.
Last Updated: 7/27/2021

Your current search criteria is: [Object]CurrentLocation is "@galleries@" and [Object]Display Artist is "Raphaelle Peale".